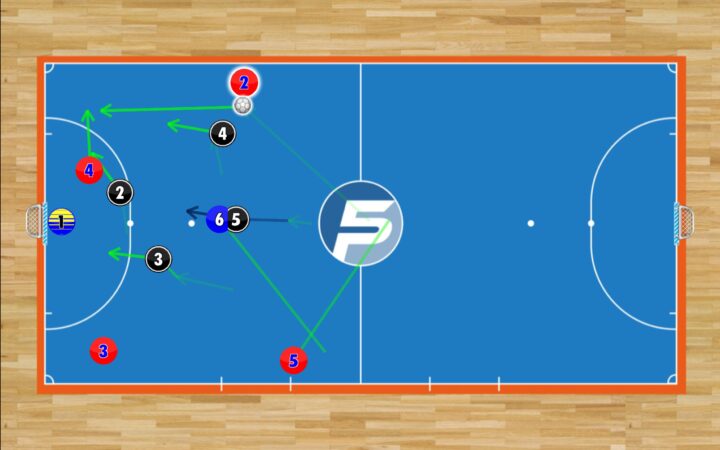 I was recently asked about defending against a team that plays fly goalkeeper when losing and I decided to animate some of my basic principles. Have a look at the video and see what you think. Below I will explain some of my thoughts.

If you want to learn more about futsal, check out Profive academy online course. You can read about my collaboration with the course here.

The situation is against a team that is trying to score, so the priority for the defence is to keep the ball out of the danger zones and wait for a mistake to capitalise on.

The basic idea is preventing the ball moving quickly around the court and forcing the passes to the adjacent player will prevent a quick switch, which can destabilise the defence. What to do in the event that the ball does “skip” a player, is a topic for another post!

Against a standard 1-2-2 attack, the above is my preferred defensive set up. With player 5 influencing the rest of the players behind them. The role of the furthest player forward is of course to stop a shot on goal, but at the same time forcing play to either 6 or 4 and cutting out any diagonal passes (also supported by the wingers, 3 and 4).

The back man or fix should be quick and tactically intelligent as they have to read the game and can see everything. They will be responsible for whichever pivot the ball gets to. If in tandem with player 5 they can force play down one side, they can anticipate a little better.

Once the ball has moved to a wing, the whole defence needs to adjust. Wingers 3 and 4 work together to prevent any dangerous diagonal passes, with number 3 especially concerned with the ball entering the middle. They should know the foot of the opponent and aim to force play down the wing, adjusting their body position depending on the player’s strong foot. 4 should watch their direct opponent and ensure nothing can reach them, usually moving closer to the second post, in anticipation of the next move.

The fix can adjust to the strong side (side where the ball is) to anticipate the pass down the wing. They need to be able to arrive to the player as the ball travels, so the distance here is important. Too far and the winger will be able to play a simple pass and too close and there may be space for a diagonal pass.

Finally, the goalkeeper must close down the ball if a pass does reach the opposite pivot via a diagonal pass.

Ball in the corner

When the ball does reach the pivot, the attack has fewer options and we can even attempt to increase the pressure here to force a mistake or win the ball back. The big danger is red number 2 scoring at the second post so our opposite winger has to mark player number 2. The fix has to be the first defence of cutting out a pass across. Number 3 can help depending on the position of opponent number 6, but if we are simply trying to keep them away from our goal, 3 and 5 can just cut out passing lines to 5 and 4 respectively.

Providing the ball only travels to players next to each other and the attack is fairly static, this defence should be solid and prevent any clear opportunities and we can pounce when they make a mistake or try to force a pass.

I also wanted to address if an attacker enters the middle zone. The principles I have put in place should cover this eventuality providing number 4 prevents a pass into the middle and number 5 is close enough to help or mark 6 if it does get into the danger zone in the middle. 5 has to make a decision here whether to cut out the side to side pass, which can cause imbalance, or mark 6. They will need to read the situation and decide where the danger lies. If 4 is doing their job well enough, 5 can focus a little bit more on the passing line to red 5. I’ll cover this in more depth later.

I’ll elaborate on defending fly goalkeeper over the next few weeks. How do you set up? What weaknesses can you find here? How should the goalkeeper be involved?