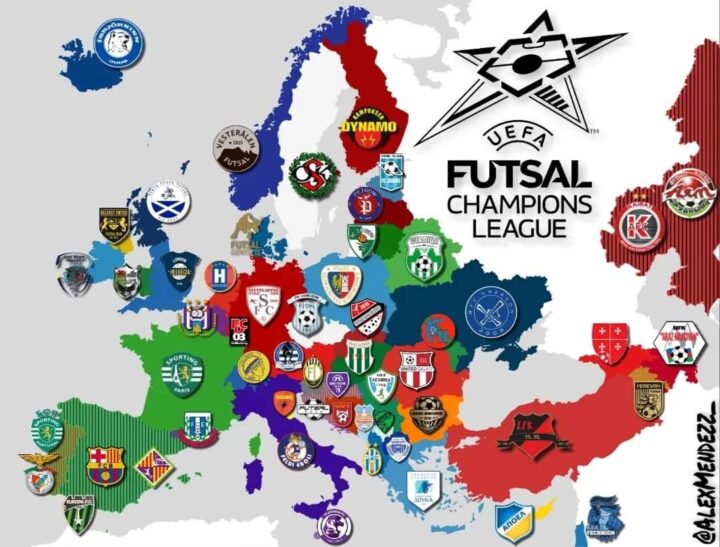 On Thursday, the draw for the UEFA Futsal Champions League (preliminary and main round) and Futsal World Cup qualifiers took place in Nyon, Switzerland. 56 teams were in the club competition draw, with two from Spain, Portugal, Kazakhstan and Croatia. 32 teams were drawn in the preliminary round draw, including British entrants, Helvecia, Perth, Cardiff and Belfast United which needs to be whittled down to eight. The other 24 teams will join in the main round along with the eight winners of the preliminary rounds making a tournament of 32 teams in eight groups of four.

You can see the full outcome of the UEFA Futsal Champions League draw here.

Main Round Path A

Main Round Path B

A few years ago, UEFA introduced a new format, which seems a bit confusing at first and I couldn’t seem to understand the reasoning. Path A sees the top 11 ranked teams and holders FC Barça plus 16, 17, 18 and 19 drawn into four groups of four. From path A, three teams progress into the Elite Round.

Path B sees teams in 12th, 13th, 14th and 15th drawn with the remaining teams from position 20-32 and from path B only the group winners progress into the Elite Round.

I suppose this format gives teams more games against teams of a similar rank and less “thrashings” while still keeping the top seeds in a favourable position to reach the Elite Round. In theory the top 16 teams have it “easier” but in both paths there is a possibility of a lower ranked team breaking in. It does have its merits I guess and yesterday’s draw was certainly exciting to watch.

As mentioned in a previous post I would love to see an elite round group stage with home and away fixtures and I do believe it will come eventually. Or what about at the main round followed by last 16 being knockout over two legs followed by a final four?!

The graphic above by @alexmendezz_ is doing the rounds on social media and I love it! I wanted to add links to all the teams’ socials if I can find them and find out a little bit about each team. It’s nice to follow all the clubs in Europe’s main competition and I am sure you’ll love to as well.

Obviously we’re missing the Russian entrants due to the suspension by UEFA. Let’s dive in, starting with holders FC Barcelona. I’ll add a few teams a day to this article and by the time the competition kicks off I’ll hopefully have them all!

Don’t need much of an introduction. Holders and no doubt favourites.

Debutants after reaching the final of the playoffs in Spain. A phenomenal rise over the years and great work by Antonio Vadillo.

One of the best teams over the last decade. Champions on 3 occasions, but fell short in the final to Barcelona last year in Riga. Beat me 18-1 in 2007 when I took a scratch team on a tour of Portugal.

Runners-up in Portugal and semi finalists of the UEFA Champions League last season, losing a 3-0 lead to eventual winners, FC Barcelona. Led by Spaniard Pulpis, they’ll be looking to win back the dominance in Portugal.

Slovenian champions and cup winners for the last four years and reached the final eight in 2021.

The second team from Kazakhstan who were last champions in 1999!

Croatian Champions for the third time in six years. The other three times they were runners-up. Croatia haven’t had a last four finish since the first edition in 2001/02.

A merger of Halle-Gook and Anderlecht. A union done right by the looks of things. The football club embracing the futsal team as part of the organisation and I am very interested to see how this grows. Belgium has a good record in the early years of the UEFA Futsal Cup, winning one and runners-up twice. Can Anderlecht be the spark to reignite Belgian futsal?

Dutch futsal seems to have a disproportionate amount of coverage in English for the level they are at and the fact that they hosted the last EURO. It’s certainly a league I’ve had trouble following and therefore haven’t particularly kept up my interest. Hovocubo are champions for four seasons in a row and five-time champions overall, with FC Eindhoven, Knooppunt and Lebo also taking titles since in the last decade. No dutch team has really made a mark on the European stage.

Haladas is a multisport club based in Hungary near the border of Slovakia and Austria and have taken the mantle of champions for the last two seasons, filling in for Gyor who folded after their final four appearance.

Formerly known as Era-pack Chrudim and a historic club, now ranked 13 in Europe. They don’t have a stranglehold on the league any more with other emergent sides pushing them, such as Sparta Prague and Plzen in recent years. That said, 16 titles in 19 is definitely domination!

Lithuanian champions for the last six years (you may know them as Vytis Futsal) and regulars in the main round plus one elite round appearance in their second season of European futsal. Amazing arena where we played in the World Cup with the Kurukuru!

Bosnia and Herzegovina champions for 5 of the last 6 seasons, only Salines taking the title in 2019 and that was due to being top at the time when the league was suspended due to covid. Regulars in the main round with a single elite round in 19/20.

Romanian entrants for the 2nd time, the first being thanks to covid and being top at the time of abandonment. Romanian teams are usually in the main round and Galati took advantage of the knockout covid format and reached the last 16.

Luxol are champions every other year since their formation, with Valletta winning it when they don’t. Usually strengthening their team for Champions League only, due to limits on foreign players in the Maltese league means they get further than the strength of the league might suggest.

Croatia are benefitting by Russian being excluded and get two clubs in this season’s UEFA Futsal Champions League due to the nation ranking. Pula are a new team and will start in main round path A with some big guns!

Most decorated club in France but their last title came in 2014 and they performed well in their last UCL campaign, finishing second in the elite round, narrowly missing out on a final four appearance. Will be happy to be back among Europe’s elite! An official affiliate of Sporting Portugal and the two teams will meet in the main round this season!