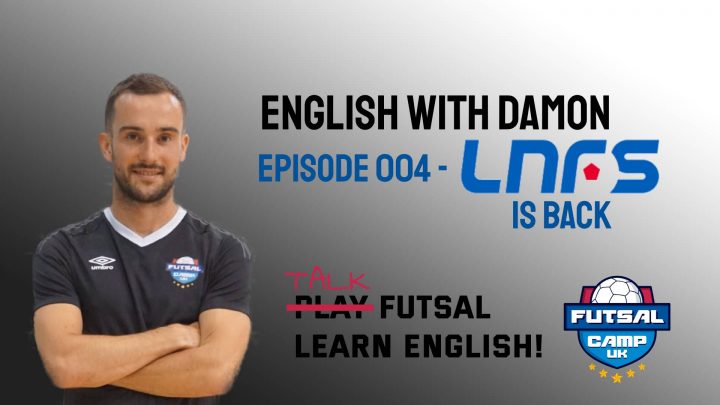 Hello and welcome back to episode four of English with Damon with the world seemingly slowly returning to normal. We can tell because sport is coming back bit by bit giving us all a boost.

Futsal leagues around the world are starting to conclude their seasons. The best league in the world will finish somewhat controversially. The RFEF has decided to go directly into an express playoff, with the top 8 teams playing for the title and two places in the UEFA Champions League.

The playoffs will begin on Tuesday twenty-third June and finish a week later on Tuesday thirtieth June and will be held in Malaga, behind closed doors.  All eight teams will play the quarter finals. It is a straight knockout. All or nothing.

So, who are the winners and losers of this method of finishing? Could we see a shock champion? Teams like Jaen and Palma who have been successful in the Spanish Cup and King’s Cup (we still say Copa del Rey in English, but you can also use King’s Cup) over the last few seasons will fancy their chances and Valdepeñas, who are the revelation team this season, in third place in the league and narrowly lost to FC Barcelona in the Spanish Cup will be confident of causing an upset.

Maybe El Pozo, who weren’t having their best season so far, will be happy with the express playoffs as they could take their first title under Diego Giustozzi with just three wins.

The biggest losers are certainly Inter Movistar, who seem to be losing a lot of their stars. Ricardinho has publicly said he’d prefer not to play as he doesn’t feel part of the squad and will move to ACCS Paris in France next season. Inter have said they’ll play the playoffs with the youth team if necessary! However, Inter still have a strong squad and we can’t write them off.  Tino Perez isn’t happy with the format, saying it’s a farce and there are a thousand better ways to conclude the season – this is horrible. He expected this in other leagues, but not in Spain.

With Inter having their troubles with players leaving and less time to train, he says it won’t be an excuse. We will focus all our energy on Jaen.

FC Barcelona must be confident – they are good in cups and also seem to have the most settled squad. However, the Express Playoffs is an excellent opportunity for the underdog and they will have to be careful not to be complacent.  Despite this, Andreu Plaza is not keen on the format either.

He said, “the format is not my favourite, but it is what it is, and we will adapt. Playing just one match evens things out a lot and we’ll have to be very focussed.

So, the quarter finals, to be played on Tuesday the twenty-third of June are:

Then on Wednesday Valdepeñas will play Osasuna and El Pozo against Palma wraps up the quarter finals. All games will be live and streamed and I am sure you’ll be able to find a link!

The semi-finals take place on Saturday the twenty-seventh with the winner of Inter v Jaen and El Pozo v Palma facing off, while Barça or Levante will take on Osasuna or Valdepeñas.

The final is then on Tuesday afternoon. Looking at the fixtures, it does seem to favour Barcelona, but as we’ve said, this format leaves it wide open for a smash and grab victory!

Are you looking forward to futsal coming back next week? Who is your favourite to win?

I’ll be supporting Barcelona and I feel they are the favourites and I am going to stick out my neck and predict Palma Futsal to be in the final with them!

Send me a message on social media “English with Damon” or comment on the video if you have any questions or requests. If you haven’t yet subscribed on YouTube or as a Podcast, you should!

Write down the dates of the games in the box below, see if you understood the numbers & days!

How can you say “contra” or “versus” in English? I used a few different ways.

Can you find any idioms or phrases that I use? And what is the equivalent in Spanish?

Who do I think will play in the final?

Write your predictions below and send them to me damon@futsalcamp.uk or share on social media!