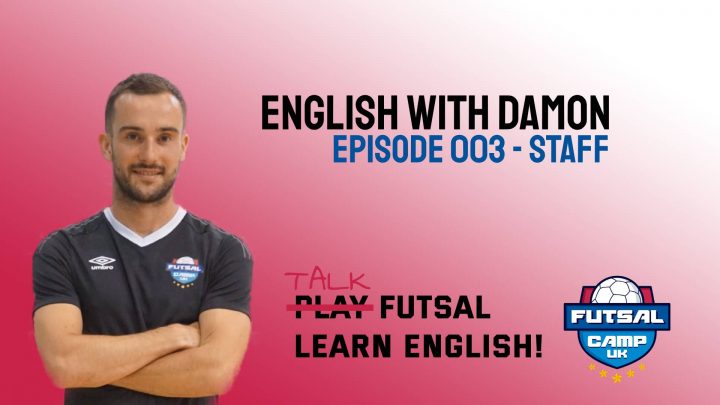 Hopefully by now, you’ve followed my social media accounts and YouTube, so you can keep up to date with the show!

In episode 2, we talked about the positions used in futsal. I hope you can now tell people what position you play in futsal – why don’t you upload a video, tag me and I will watch and give you some feedback! While we are still small and it’s just me, I don’t know how many people are watching, I don’t mind, take advantage of me!

Okay, in this episode, I want you to get to know all the staff who work in a team – the technical staff or coaching staff. Just two ways to name it.

As you may know, my current role is that of head coach. In English we also use the word manager, but the actual roles might be slightly different. Sir Alex Ferguson would certainly be a manager, whereas Pep Guardiola might be seen more as a coach. Traditionally a manager would oversee the whole of the club including the academy and transfers, whereas now, a technical director might be above the head coach to do these jobs. There may even be a general manager. A position that is more common in American sports than in Europe. In Spain, this position is quite common in futsal. Maybe it’s called a director.

Let’s take a step back and talk about the top of the club. How might we describe the person at the top? A lot depends on the club structure, but the “top dog” could be the president or chairman. In a private club, the big boss might be the owner.

So, to refer to my club, I have a general manager that I answer to. He has the overall vision of the club and is part of the committee of the club, which in my case, is an organisation with a football team and women’s team.

He’s the guy that gave me the opportunity and my job is to implement his vision. While I have my own philosophy, it’s better if we have similar ideas about how we play and behave, which fortunately, we do! He will set the objectives for the season and give me the resources to do that including hiring the players and staff I want.

So back to my staff… As head coach, it is my role to manage them and make sure we work together as one team. I believe each of us has to have several responsibilities, even outside our main ones, so that we form a culture of working together. Firstly, before we begin training for the season, we’ll have a meeting. I think that for an assistant coach to be most effective, they should take on a role that they enjoy. Of course, we can’t have 4 people all coaching attack, but I will ask the other coaches if they have a preference and then I’ll make sure all jobs that need doing are distributed according to their strengths and where possible, preferences. It’s also a good idea to stretch a coach to something they may have never done before. When I was assistant coach in Industrias Santa Coloma, I was also in charge of goalkeeper coaching and it was a new and welcome challenge for me!

My assistant coach, or assistant manager, is the person that will be most hands on and will share the load of coaching with me. I actually call all my staff assistant coaches as none are more or less important than another. We all have a job to get the best from the team! However, for today, I’ll talk to you about my assistant coach who is called G! G knows the players better than I do and speaks the language, so he has a role to give important messages to the team. G also takes on the role of goalkeeper coach.

Then I have coach Zaidi who is the physical trainer or fitness coach. Zaidi does warm-ups and is in control of making sure they are in the best condition for the demands of futsal. Zaidi also has the role of defending fly goalkeeper so that we can train both at the same time!

Next up is Rahman who is the physiotherapist. Rahman looks after the injured players, but also tries to prevent them getting injured with injury prevention routines!

I have Jai who is the kit manager or kit man. This guy is very important! Make friends with the kit man if you want to get the new kit. And finally I have Acak who is a bit of everything and he is in charge of the admin. While he’s not officially the secretary, you could call him the team secretary.

Scout or Analyst – someone who uses video analyses our matches and the opposition. At the moment this is a role shared between us and it’s something that I like to do myself.

Psychologist – not a role that is very common in futsal, but one I think should be and could be in the future! If you have one of these available, you are very lucky!

Together we are the coaching staff, or technical staff of the team. What other roles could a team have?

Do you have a preferred job you would like to do, perhaps when you finish playing?

Can you name all the roles in a coaching staff? Write them in the box below.

How are Sir Alex Ferguson and Pep Guardiola different?

How many ways of describing the boss of a club can you hear?

What do we have before the season starts?

Draw the structure of your club below, with the names and positions of all the staff and owners