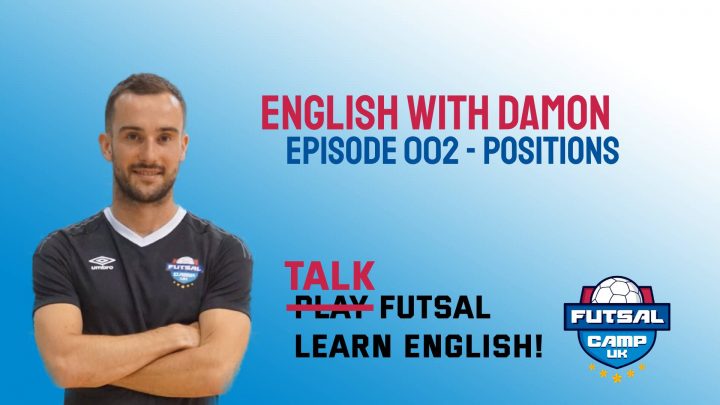 Welcome to English with Damon Episode 2! I’m Coach Damon Shaw and today we’re going to talk about futsal positions as well as some other basic vocabulary used in futsal. I hope you enjoyed the first episode and managed to do the worksheet – it wasn’t too difficult was it?

So, what is your favourite position in futsal? Goalkeeper? Winger? Fix, Close, Sweeper? Striker? Pivot? Well, hopefully after today, you can tell people where you like to play in English! It’s true that in England we don’t have literal translations from Spanish or Portuguese AND it’s true that when futsal started to become popular, PIVOT was used to mean the defender!

The positions in futsal are goalkeeper, winger, pivot and the one which we have trouble with in English – the defender. You can see this player called lots of different things. Close, fix, sweeper, back man. I am going to use defender and even though we all know in futsal, all four players must be defenders, that’s the word we’ll use to describe the player furthest back ! In my current team, we use the word fix. This comes from the Portuguese “fixo” and in different cultures you may come across different words for this player, but defender will always be understood! Don’t translate it literally from Spanish – close or closer, it doesn’t really make sense in English!

Usually a team will line up with a defender, two wingers and a pivot, especially if they are playing 3-1.

So, let’s talk about the defender in futsal! Who is your favourite defender? One of the best in the world right now, and over the last decade is Carlos Ortiz. I had the pleasure to interview Carlos in Zaragoza in 2018 just before Inter won their 5th UEFA Futsal Champions League. He is a very kind and friendly person as well as being a futsal star!

What makes a good defender?

This player is usually a leader and can control the play so must have very good tactical understanding and act like a coach on the court. They need to be an excellent passer and also be able to shoot from distance. All players must be able to defend, but usually this player is the last line of defence so must have good anticipation and reactions.

Wingers are different to defenders in many ways. They are usually fast and skilful players. The ones that make futsal so popular. Players like Falcao and Ricardinho have gone viral on social media, giving futsal more exposure. The wingers will be good in 1 on 1 situations, good passers with both feet and of course, must be good at defending too. They will usually be in the first or second line of defence so it’s important they don’t get beat easily!

If playing 3-1, then the pivot is the fundamental player and is the attacking reference for the team. They should be good at finishing, strong so that they can hold up the ball, able to play with their back to goal and turn both ways.

Last but not least and actually, arguably the most important player in any team – the goalkeeper. Some coaches say that the goalkeeper is fifty percent of the team, some say even more! I agree that the goalkeeper is essential. You can have a top team, but without a good goalkeeper, you will find it very difficult to win championships. On the other hand, a leading goalkeeper can make an ordinary team into a great team! What makes a leading goalkeeper? They must be brave to begin with. To stop shots from close range it can hurt. Most goalkeepers I know are a bit crazy! Good reactions are vital, as is excellent positioning so that they can make it hard for an opponent to score. A goalkeeper has to be almost as good as the players when it comes to passing because their distribution is key to quick attacks!

Are there more positions? Of course – we’ve covered the traditional ones, but there are many ways to describe players outside of the common ones.

Universal or all-rounder – this describes a player than can fulfil all of the roles on the court. “I can play anywhere” if a coach asks you! You would need to be able to prove that though!

Fly goalkeeper – usually a specialist player that enters the court in place of the goalkeeper. They will wear the goalkeeper shirt with their own number on and be restricted by the same rules as the goalkeeper (such as four seconds possession) but will play in the attacking half when the team needs a goal or wants to keep possession. They would often have similar attributes to a defender.

Mobile pivot – traditionally a pivot would stay central and receive passes in order to lay off their teammate or turn and shoot. A mobile pivot is a player who drops (not falls for Spanish – let’s be aware of false friends!) to a wing, creating an overload on one side or to create space on the other.

False pivot – a false pivot creates the reference point of the attack on one of the wings – usually the opposite to their strong foot.

So, there you have the main positions on a futsal court, but they aren’t the only people involved! If you want to talk about futsal, then you’ll need to know other people around a team.

In episode three, we’ll talk about the roles of the technical staff! In the meantime – do you know any more positions of players on the court and want to know them in English? You can leave a comment or contact me on social media – search “English with Damon”, and we can include it in a future episode!

How many words do you know to say “important”? Write as many as you can, even if not used in the episode!

When we talk about males, we use he/him and females we use she/her, but we discussed futsal in general – what did we use instead of he/she, him/her?

What was wrongly used to describe the defender in English?

What is the word for a period of 10 years?

Write a description of yourself as a player.

Skilful (be careful – just one L)