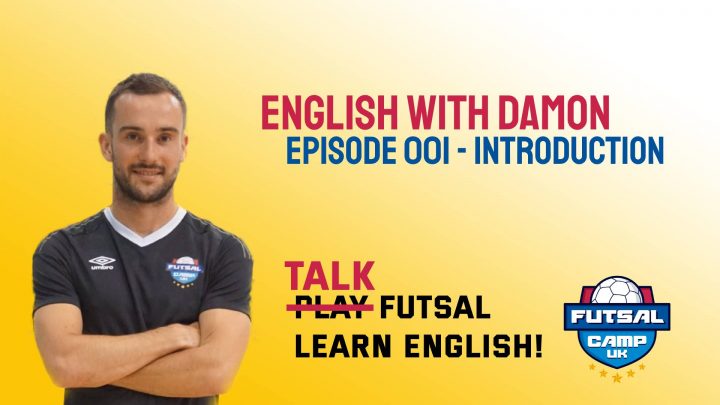 Welcome to English with Damon Episode 1! I’m Coach Damon Shaw, founder and director of Futsal Camp UK and head coach of Perak Futsal in the Malaysia Premier Futsal League and we’re here to talk futsal and learn some English! We’ll talk about our favourite players, our experiences, learn what words we use in futsal in English and discover what’s happening in leagues around the World. Send in your suggestions too in the comments or on social media – you can find me on “English with Damon”.

First of all, I hope you are staying safe during the COVID-19 pandemic and of course, staying at home and following the guidelines.  We have to say a HUGE thank you to all the key workers who are working hard to fight the virus and keep us safe. Especially the nurses and doctors, but not just those – let’s remember the scientists, the supermarket workers, the delivery drivers and the food outlets among many others, who we couldn’t live without – they are all the real heroes!

We have all been affected in one way or another from not being able to meet friends, holidays being cancelled, jobs suffering and schools being closed. Not to mention sports. I believe in seeing the positives in any situation and this has led to me launching this show!! Futsal Camp UK 2020 was going to be the best one so far – we had people interested from Asia, South America and Africa, as well as Europe. Unfortunately, I’ve decided that the best thing to do is to cancel this year’s Summer Camp and focus on 2021 – when (hopefully) all our lives are back to normal.

To make sure we are still helping you to learn English, we’re going to do a regular show, discussing futsal and learning at the same time! For now, it can help you while you are off school (or work), but also for the future, I hope you can gain a basic understanding of English for futsal.

The show is totally free and will be available on my YouTube channel and the Futsal Camp YouTube and social media channels, as well as on Spotify, Anchor, iTunes and wherever you listen to podcasts. I will upload worksheets if necessary, to help you and give you some activities to do after each one. I’ll happily look over your videos and exercises if I have time and maybe we can do some shows with your videos on as well!

So, for the first episode, I’m just going to introduce myself and tell you a little bit about my futsal career. See if you can answer the questions on the work sheet! (Link to website).

My name is Damon Shaw and I am 36 years old. I am from Blackburn, which is a small town in North West England, near to Manchester. Blackburn has around 150,000 inhabitants. You might not have heard of it but you may know Blackburn Rovers, Premier League Champions in 1995! I don’t support Blackburn Rovers though; I am a Manchester United fan!

I started coaching futsal in 2005 when I founded Teesside University Futsal Club. We won the British University Championship 3 times, in 2007, 2010 and 2012. At the same time, I was coach and president of Middlesbrough Futsal Club.

In 2013 I moved to Spain to learn more about futsal and to learn Spanish! While there I took the Level 1 and Level 2 course. I coached in Hospitalet Bellsport for 1 season and then I changed to Catgas Energia Santa Coloma now known as Industrias Garcia. I was under-14s assistant coach, with Edu Blanco. Spain was such an amazing experience for me. I learnt so much and made a lot of friends. I hope to return some day!

Then, I was hired by Tranmere Rovers, so I went back to England. In my first season, we won promotion into the first division (Super League) but we didn’t do enough to stay in that league, and we were relegated, although I left before the end of the season.

After 2 years in England, Swieqi United of Malta called me and offered me a job there. Malta is a small country in the Mediterranean Sea, between Libya and Italy. The climate is very similar to Spain, which I loved so much! Futsal in Malta is small, like in England, but there were some professional teams. My first season was quite good, we finished joint 3rd, behind the 2 professional teams, Luxol and Valletta, teams that have played in the UEFA Futsal Champions League. My second season was a bit of a disaster! We lost 6 of the opening 7 matches and I was sacked!

Every cloud has a silver lining and just after I left Malta, Perak Futsal got in touch with me and here I am, in Malaysia, ready to attack the 2020 season. We already played one match, before the virus disrupted most of the sport in the World.

So, that’s a brief summary of my futsal career so far. I have lived in England, Spain, Malta and Malaysia and I have visited many more countries through futsal. We will talk about travel in a future episode!

For now, you can complete the worksheet and leave a comment to say hi and where you are from!

Don’t forget to subscribe and find me on social media – English with Damon on IG and facebook. I don’t have tiktok or snapchat, but who knows, maybe if I get bored, I will download them!

Stay safe, wash your hands and thanks for listening!

Can you find examples of the following?

What does “every cloud has a silver lining” mean?

Can you find any phrasal verbs?

How old is Coach Damon Shaw?

Where is he from?

Which football team does he support?

Which two clubs did Damon work at in Spain?

Which 4 countries has he worked in?

Can you name any of the teams in Malta?

How many times was Damon British champion with Teesside University? And which years?

Moved back (to move back)