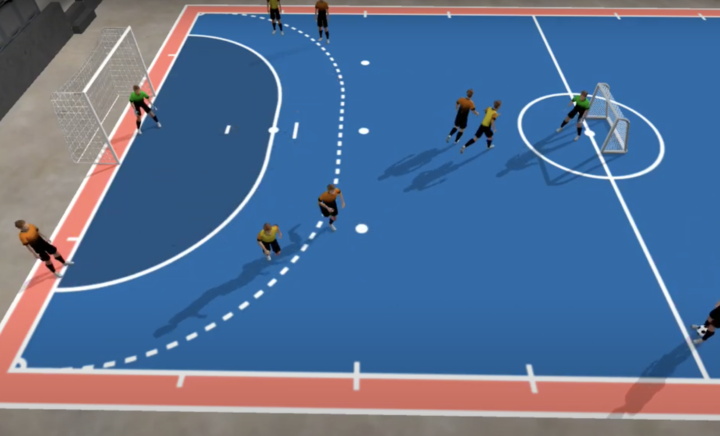 A very useful exercise for work on the 3-1 system. You can focus on the creation zone or pivot play.

To learn in more detail about futsal, using the 40×20 methodology, clicking the links in this article will take you to ProFive Academy. Read about my collaboration here.

3v3 in the creation zone (the players can use their own end zone, but the pivot and defender should be inactive) with a pivot and opposition defender in the end zone. The attacking team can only score after connecting with the pivot. (See variations). Whenever the ball goes out of player, you can either start from the goalkeeper, or keep it real and play from kick-in etc.

To begin with, and especially in development teams, the pivot should be allowed to receive the ball before the defender tried to win the ball. I.e. the defender must defend behind the pivot.

Movements between three players to create a pass to the pivot. Pivot movements and technique. Finishing. 3-1 system.

The three players must find a pass to the pivot. Initially only the passer can enter the end zone to finish and the pivot must be allowed to receive the ball. Once the players are more comfortable with the system, the defender can defend freely (intercepting if possible). Indirect players can enter the end zone (see video) as can the defenders. You can isolate the pivot play and work on finishing by only allowing the pivot to finish. As the game progresses you can allow the pivot to come short, bring the defender out of the zone to create a very realistic exercise, resembling a match.

Firstly work on the pivot’s movement to be in a passing line and where possible in sync with the team’s 3-1 system model of play and the pivot’s hold up play.

Work on the players in the creation zone, engaging the defenders before making a pass or run in behind.

Ensure the players coordinate with the pivot and each other to create a chance. Use overlaps, change of directions, diagonal runs… attack the ball and attack the space.

When the exercise advances, when should the pivot come short to join in play and what can the rest of the players then do to exploit the space created?