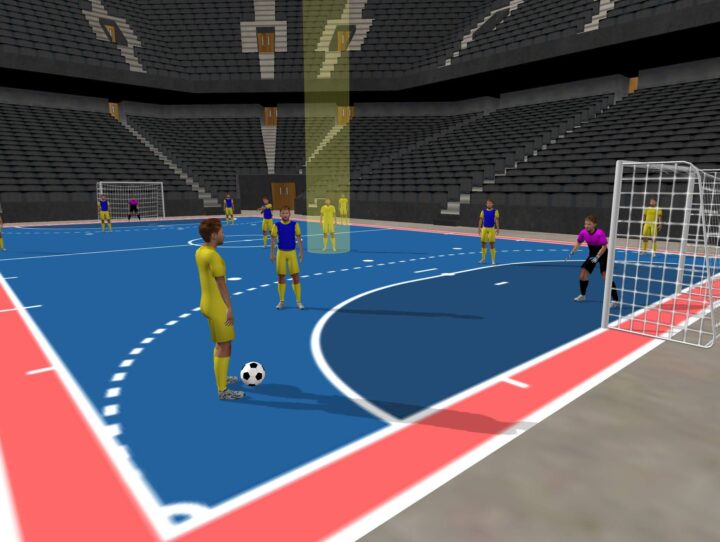 This exercise is one of my all-time favourites, inspired by Xavi Passarrius when I spent a lot of time at Industrias Santa Coloma observing. It seemed to be a regular session for Xavi and I can see why. It mimics the intensity of the game perfectly (usually 6 minute reps) and replicates many of the in game moments such as: play out of pressure, 3v2s, finishing, goalkeeper distribution and decision making.

Don’t forget to correct the defenders or attackers based on your game model and philosophy and objectives for that particular day. If you vary the outcomes and use variations, there is no reason you can’t use this session many times during a season.

5 players, 2 goalkeepers (with subs as required)

Balls (plenty, stored as close to the goal as possible), bibs

In each half there is a 3v2 attacking plus a goalkeeper. The ball starts with the goalkeeper and they must play the ball to one of their team mates in their own half to play out of pressure (2v3). The objective is to play the ball to the same team in the other half to initiate a 3v2 in attack. With a 3v2 the 3 must create a shooting opportunity within 5 passes (or a time specified by the coach). I personally prefer to count passes and actually I like it to be finished in a maximum of 3 passes. Whenever the ball goes out of play, the goalkeeper of the team with possession starts. You can also add in corners or kick ins, if you are working on those! Like I said, many possibilities from this exercise.

Working on finishing 3v2 quickly, how to play out of pressure, goalkeeper distribution, defending 3v2 and a high press.

This is where your model comes into play. Make the corrections you want to see and focus on only one aspect primarily. I.e. attacking or defending. I tend to focus here on how to attack or defend the 3v2, but also on starting positions and quick decision making if my players are picking it up.

Play out of pressure

While slightly unrealistic in that there are 2v3, it is a really good exercise to prepare your players to play out of pressure as they are at a disadvantage. If they find it too hard, then you should allow the 3rd player to enter the defensive half to help play out of pressure.