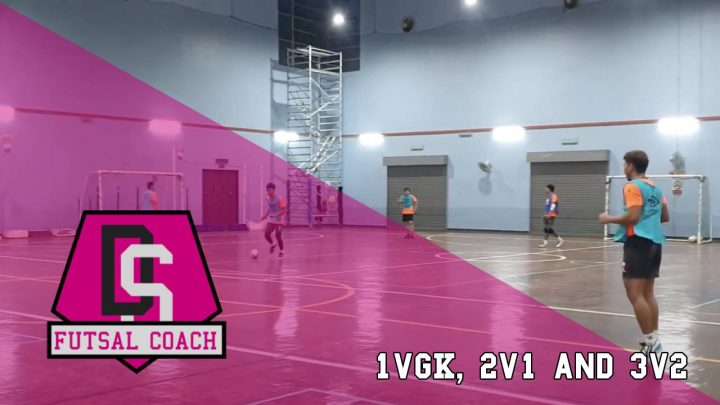 This exercise can work on many aspects of attacking and defending with a numerical advantage or disadvantage. There will be 1 v the goalkeeper to practice finishing, 2v1 and 3v2.

It’s really good for many repetitions of the above situations, which are very common situations in futsal and if we can perfect them, in attack and defence, then we are going to improve our game immensely.

Don’t forget to correct the defenders or attackers based on your game model and philosophy.

You start with 2 teams at opposite ends of the court, balls around for them to use or with the goalkeeper. The first player attacks 1vGK. When finished, 2 players from the opposite side attack 2v1, then 2 more players join the game to make a 3v2. I don’t ask for them to do this quickly, unlike the 1v1 exercise I posted last month, as I am keen to ensure that we have the 2v1 situation, rather than 2 v GK. If the 1 defender wins the ball and attacks, the next attack is still 3v2. If a team scores with the 3v2, they get to attack first again. Keep score.

Make it full speed, as in the next attackers can enter quickly.

This is where your model comes into play. Make the corrections you want to see and focus on only one aspect primarily. I.e. attacking or defending. In the video, I am correcting the defence of the 3v2. Below is a graphic of some of the explanations I will use.