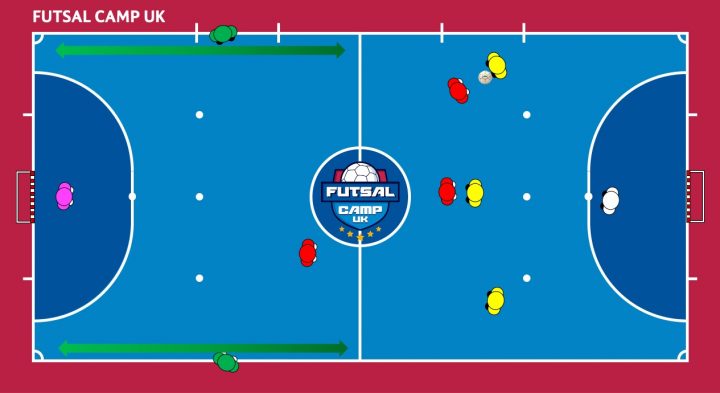 I saw this exercise published by Cesar Nuñez, head coach of PTT Chonburi Bluewave, on his YouTube channel and it came without a description so I’m using it for inspiration to make my own.

As with any session, you should design it for YOUR team, YOUR model of play and YOUR system. Below is my session, based on the video.

It’s not an original drill (but most are not) – I’ve seen a similar exercise by Marc Carmona when he came to Tranmere to deliver a futsal masterclass and each coach will (should) use this exercise for their own outcomes and with their own corrections. Watch the video and see what you can take from it. I’ve watched it a few times, and below is the exercise I have seen. It may or may not be different to the intentions of Cesar Nuñez.

3v3 with 2 floaters (jokers, comodines, jollies) that play for both teams when they have the ball. The attacking team can use the floater on the OPPOSITE wing. That is from the left side of the court, can only use the floater on the right and vice versa. The floater cannot score – must circulate play or pass to second post. The aim is to cause the defence to become unbalanced, creating that pass to either a pivot on the opposite wing, or a winger advancing. Not sure if the coach here allows progression without using the floaters, but that’s something that you, as a coach, can decide. I prefer to allow it, especially if you’ve used this a few times so it’s more realistic. The defenders could cheat and exaggerate the defence to cut that pass out.

Always start from the goalkeeper and make sure the defence is set to press (obviously with your system). You could use it against a half court defence too.

While this exercise is an attacking one, it could easily be used to work on the following defensive concepts, as well as your own defensive system.