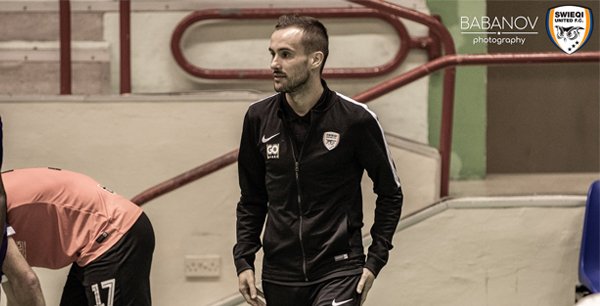 Swieqi United have appointed Damon Shaw as head coach for the rest of the season following Boicho Marev’s departure in December. Shaw will take over the squad in 4th place in the MFA Futsal League and will oversee the rest of the Elite League, starting with tonight’s match with Tarxien Rainbows.

Shaw will continue in his role as technical director and coach within the academy, while also taking on this role, assisted by Nikola Farrugia.

“I’m delighted to be asked to take on the role of head coach and I am looking forward to the challenge. We have a very good squad and we’ll be looking to add to that to give us the best chance of winning the league. The boys have been great in the first week and I am sure we can compete for a place in the final. It’ll be tough after we lost to Birkirkara, but with nine matches left, it is in our hands,” said Shaw.

Shaw is the first British coach to attain the UEFA A licence and comes from the back of two years in the English FA Futsal League and three years in Spain, most recently with LNFS club Industrias Garcia.