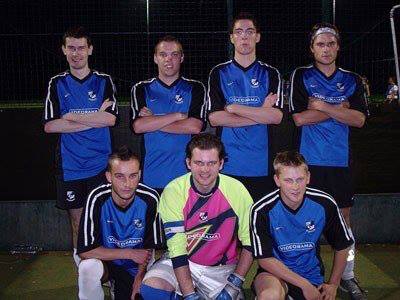 by Damon Shaw
The Snake Pit’s green stage, beneath a sky of powdered sapphires, manicured to a flawlessness which John McEnroe at his most cantankerous could not fault, was crying out for something special.
Sumner was first to oblige. The significance of his 8th minute goal, a wonderfully constructed masterpiece from 10 yards, was twofold: not only did it ensure Aragon held a half-time lead, denting the visitor’s self belief, it brought resounding reassurance that life carries on after Joe Marshall.

The goal came against the run of play, which for the first 8 minutes, saw WhaleKRABBS dominate attacking possession, create several chances. Aragon were wondering whether this was to be their year or not. However the sturdy defence dealt comfortably with all that WhaleKRABBS had to offer, their two best chances being well saved by Craig Brown. The introduction of debutant Anthony Berry for the somewhat uneffective David Jaggs, brought an immediate attack. Wemyss-Holden played the ball forward and Damon Shaw deftly flicked it past the last defender to leave Sumner through on goal and it was well placed in the top corner.

The second came straight from kick off in the second half. Wemyss-Holden fought doggedly in the corner to break free and play the ball across the goal for Berry to score what couldn’t have been an easier debut goal. At 2-0 Aragon had a cushion, but in 5-a-side 2 goals isn’t much. For 7 minutes WhaleKRABBS attacked the goal, having many a shot blocked and even more flying high and wide.

On 21 minutes Aragon broke with Wemyss-Holden playing a slide-rule pass through to Shaw who confidently gave Aragon the lead and surely a very important win in the opening game.

WhaleKRABBS had again failed to meet the expectations, by succumbing to an opening day defeat, albeit to the hands of the champions, of the fans and players alike. On the 23rd minute a clearance by Oliver Craddock ricoche’ed off David Jaggs and gave Aragon a 4-0 victory and Jaggs’ a deserved goal after returning to the pitch and redeeming his earlier performance.

And so the curtain was raised: not only to a new tournament, but on the supreme teamwork that made Aragon winners last year.

Man of the Match: Damon Shaw As well as scoring 1 and assisting 1, Damon made several important blocks and had 2 good shots, one thundering against the post.